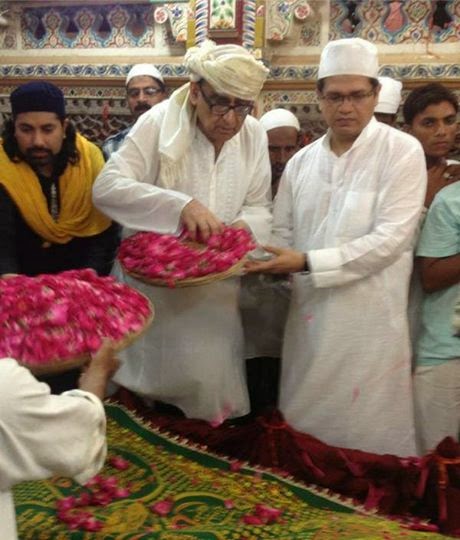 Went to the Dargah of Hazrat Amir Khusro in Delhi yesterday evening for the Urs Mubarak. Visited Sheikh Nizamuddin Aulia and Hazrat Amir Khusro's dargahs (they are next to each other in the same compound), and placed chaadar on them. Just in time for the dua prayers. Then went to the qawwali, after which I gave a short speech praising the sufi saints who made such a great contribution to our composite culture and spread the message of universal love and toleration. I was taken around by Farid Nizami, son of the head of the Dargah. Salman Chishty of Ajmer Sharif Dargah was with us.

I asked about the significance of Urs. I was told it is the death anniversary of the sufi saint, but it is celebrated as a wedding because after the whole life's service to mankind the saint goes to see God on his death. Thus his life's wish is fulfilled.

I was shown the photograph of Pt. Nehru with my grandfather Dr. Katju at the dargah. It must have been taken in the early 1950s when my grandfather was Union Home and Law Minister in Pt. Nehru's cabinet

I love going to dargahs ( which are shrines built on graves of sufi saints) because they unite Indians. In temples only Hindus go, in mosques only Muslims go. but in dargahs all go. So Dargahs unite us, and I love whatever unites us.

Amir Khusro ( 1253-1325) was the Michelangelo of India. He was a Sufi mystic, and disciple of Hazrat Sheikh Nizamuddin Aulia. He is an iconic figure in Indian cultural history, having made contributions in several fields, a few of which are enumerated below :

1.He is perhaps the first poet in Hindi ( also called Hindvi), though he also wrote poems in Persian
2.He introduced ghazals in India, having borrowed this poetic form from Persian
3. He is the father of qawwali, a form of spiritual music often sung in dargahs
4. He invented the musical instruments sitar and tabla

i.e.
" Every people have a pole (qibla) to which they turn "
( Qibla means the direction a Muslim should face while saying his prayers i.e. towards the Holy Kaaba in Mecca)

The verse means that I am a sufi like my master.

It is a pity that many Indians do not know about Amir Khusro, who is a giant in our cultural history.