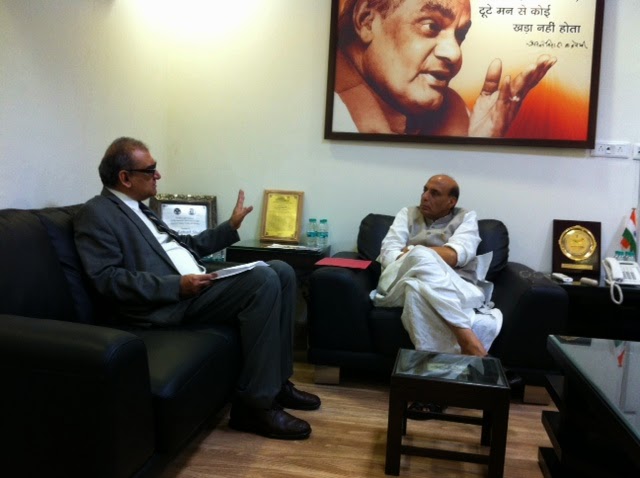 I just returned after a half hour meeting with the Hon'ble Union Home Minister, Shri Rajnath Singh, and submitted him the Memorandum  earlier posted by me.

Shri Rajnath Singh read it in great detail. He said that the suggestions were very valuable, and will be put up tomorrow in his meeting with the Central govt officials concerned.

He made notes in his own hand on the Memorandum, and discussed the items mentioned therein with me.

In particular, he mentioned that the suggestion for de-watering pumps for removing the water in several localities was a very useful one. Also, the need for medicines, food, water etc.

I emphasized to him the need for a Central Cmmand Centre which would coordinate the work of all the relief agencies, as presently these agencies, while doing good work , are doing it in an uncoordinated manner, thus reducing their effectiveness. I suggested to him that with the consent of the state govt of J&K, the Union Home Secretary, Shri Anil Goswami, who is presently camping in Srinagar, may be made Head of this Central Command Centre, while the Chief Secretary of J&K may be made its deputy Head. That way both Central and State Govts will work in tandem. He agreed to put the suggestion tomorrow in his meeting with the Central Government officials.

At the end of our meeting Shri Rajnath Singh thanked me for these suggestions, and said that all that is possible for relief and rehabilitation work will be done by the Central government. He said that as soon as he came to know of the calamity he had rushed to Srinagar to acquaint himself with first hand knowledge of the situation.

I also told the Home Minister that a delegation of Kashmiri Media persons, headed by Shri G.H. Kaloo, President of the J&K Press Association, is coming on Tuesday afternoon to Delhi, and wanted an appointment with him on Wednesday. He agreed to give such appointment.

I thanked Shri Rajnath Singh for giving me so much time to discuss the matter.