I received a lot of rakhis today from my sisters and cousin sisters. 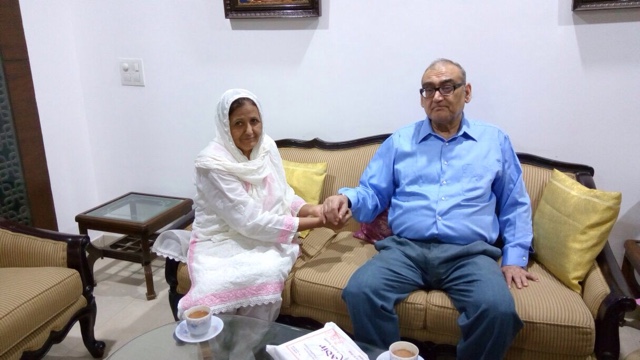 But the most treasured one was from a lady, Naseem Zohra, who regards me as her brother.

When I was a lawyer in Allahabad High Court among my close friends was Afsar Ali, advocate in the High Court. He was elder to me by a few years. He had married Naseem Zohra, and had 4 small children ( 3 daughters and a son ).

Every year on Eid he would invite a group of 4 or 5 friends to his house in Daryabad for dinner. He was a conservative Muslim, and we never saw his wife as long as he was alive, as she was in purdah. But she used to prepare delicious non vegetarian dishes for us.

I became a Judge of the High Court in 1991, and in 1992 Afsar Ali died. Naseem Zohra sent me a message that she wanted to meet me, and I requested her to come to my residence. There she told me that her brothers in Rampur had asked her to come there with her children, and live there.

I told her that she should not shift to Rampur, as after some time she would not be welcome there. I said that she had her home in Allahabad, and she should remain here, and I would get her a job in the Allahabad High Court, so that she may be able to have an income to feed her children. However, I told her that she must give up her purdah now, as she would have to fight it out in the outside world, from which she had been till then largely isolated.

Accordingly i got her appointed on a class 3 ( clerical ) post, and I told the Registrar General to post her in the High Court library, where the work was lighter, and she could go home early. This enabled her to support her family, which she did.

I also advised her to get more qualified, since in 1992 she was only Inter passed. Accordingly she did her B.A. Ll. B, and B..Lib ( Bachelor in Library Science )

All this happened over 24 years ago, but every year since then on rakshabandhan day she has been regularly sending me rakhi, and also coming personally to tie it on my hands whenever she could. The written message to me every year ( with the rakhi ) says '' Aapne bhai ka farz nibhaya ''. Today she told me that if I had not helped her in 1992 she would have been washing utensils in some household

Now all her 4 children are grown up and well settled. She has several grandchildren.

She told me that she has now retired as a bench secretary in the High Court, and gets Rs. 24, 000 p.m. as pension, apart from her providend fund.